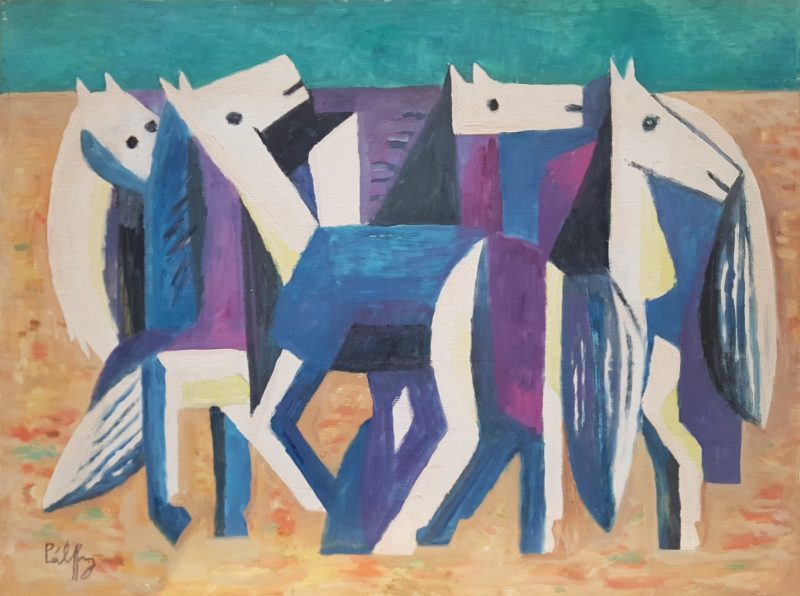 Already in Peter Pálffy’s Parisian period (1924-33) the motif of the horse played an important role in the painter’s work. His love of nature, hunting and the animals associated with it, such as dogs, horses, deer and birds, originated during his youth at the Slovak hunting lodges of his noble family. In the 1950s his horse depictions became increasingly cubist and abstract. The present painting shows a densely packed herd, whose individual animals are geometricized by form and color in such a way that their bodies merge with each other. The light, sandy ground is closed off by a high, turquoise horizon.
Born in 1899 in Schloss Seebarn (Korneuburg/Lower Austria), Peter Pálffy derives from Hungarian ancient nobility. After studying at the Academy of Fine Arts in Munich (1921-22) and at the Berlin Academy of Fine Arts (1922-23), the young painter moved to Paris. There he was inspired by art movements such as New Objectivity, Cubism and Fauvism to create an independent, progressive style. Between 1933 and 1945 Pálffy lived in his family’s castles in Slovakia and took an active part in the country’s artistic life. While fleeing from the Russian invasion to Austria, he had to leave behind many of his works, which can be seen today at the Bibersburg (Hrad Cerveny Karmen). For 17 years Pálffy lived and worked in Kitzbühel until he finally moved to Vienna in 1962. He joined the progressive art club and became a member of the artists‘ group „Der Kreis“. Numerous exhibitions, for example in Vienna, Bratislava, Munich, Switzerland, but also in Paris and New York are proof of the high quality of Peter Pálffy’s work. His works can be found today in the Slovak National Gallery in Bratislava, in Mumok Vienna and in the Lentos Art Museum in Linz.