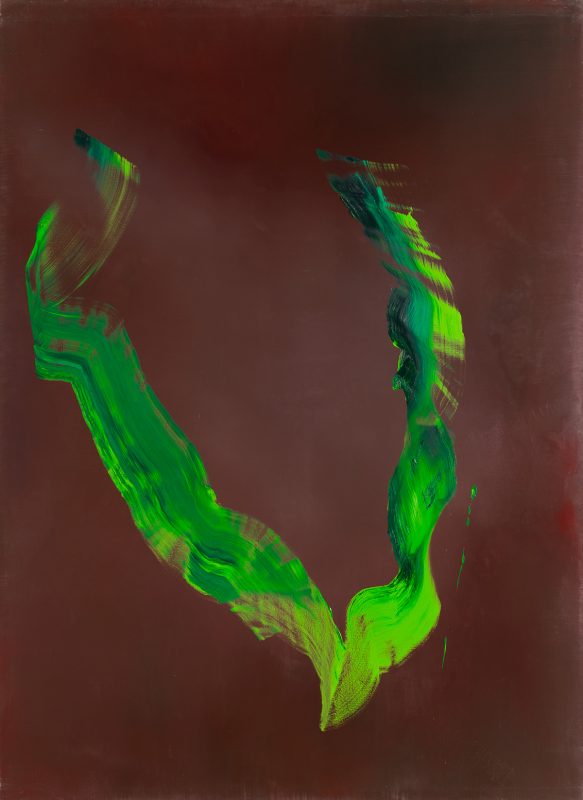 A picture embodying a space and time of its own, a dense atmospheric background, charged with artistic energy; suspended within this a monumental gesture of color, a polychromatic vibrating trace of an act of creation, emitting great dynamism, but also a majestic sense of peace. The painting from the series “Ones” is purely abstract and yet full of mysterious narrative power, which awakens a highly individual, unique world of thoughts and feelings in every observer.

Born in Gmunden in 1952, Hubert Scheibl studied at the Vienna Academy of Fine Arts under Arnulf Rainer and Max Weiler. In the early 1980s, he became one of the protagonists of the “Neue Wilde”, a neo-expressionist group of artists and embraced an abstract style of painting characterized by the materiality of the impasto colored surface. Around 1990, this gave way to a membrane-like, translucent, thin-layer application of paint, which led away from the surface and towards spatiality. Hubert Scheibl’s highly successful career is characterized by a lively exhibition activity, both nationally (e. g. the Belvedere and Albertina Museums in Vienna, Salzburg Museum of Modern Art, Lentos Museum Linz) as well as internationally (New York, Miami, Paris, Beijing, etc.).