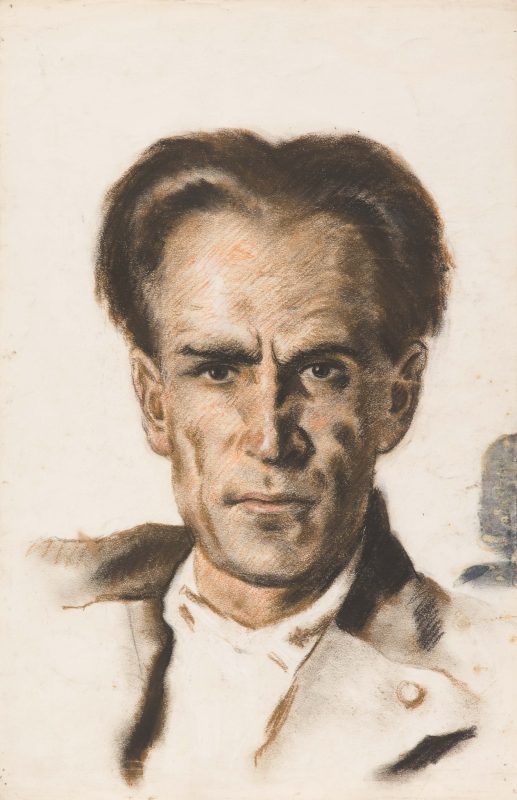 Hirschenauer, born in Schärding in 1885 as the son of the wealthy innkeepers Ferdinand and Creszenz Hirschenauer, began studying painting at the Royal Bavarian Academy of Fine Arts in 1911 with Gabriel von Hackl (teacher of Albin Egger-Lienz) and Hugo Freiherr von Habermann (founding member of the Munich Secession). After graduating in 1918, he worked as a freelance artist in Munich, then moved back to Upper Austria (living in Schärding and Linz) and became a member of the Linz artists‘ association MAERZ and the Innviertler Künstlergilde. Through these artists‘ associations he was acquainted with Alfred Kubin. He had a particularly close friendship with the Linz painter Demeter Koko and his wife Kamilla, of whom he made portraits (as he did of Kubin).
Hirschenauer took part in the 1924 exhibition of the Vienna Künstlerhaus (alongside Faistauer, Boeckl, Kokoschka and Walde) and in several exhibitions of the artist group MAERZ. In 1956, a year after the artist’s death, the first memorial exhibition took place in Schärding. Others were to follow. Hirschenauer’s works could also be admired in the exhibitions „Demeter Koko, Max Hirschenauer“ in 1979 at the Schlossmuseum Linz, „Late Impressionism in Upper Austria“ in 1990 at the Ursulinenhof Linz and „Painter of Light“ in 2010 at the Artemons Art Museum in Hellmonsödt near Linz.
In Hirschenauer’s work one can find influences of the Munich School, the School of Barbizon as well as Austrian atmospheric impressionism. The artist described himself as a realistic impressionist. Besides landscape and nude painting, portraiture was the most important focus of his oeuvre. The well-off inhabitants of Schärding and Linz liked to have themselves painted by Hirschenauer – for example, the Linz mayor Karl Sadleder or Alfred Kubin. The price of such a portrait was about the monthly salary of a primary physician and testifies to the high esteem in which Max Hirschenauer was held by his contemporaries as a first-class portraitist.
Max Hirschenauer was one of Alfons Walde’s closest friends in Kitzbühel. The two painters had met in 1917 during Walde’s stationing in Schärding (Hirschenauer’s birthplace). Hirschenauer himself owned a plot of land on the Hahnenkamm, for which Walde (who was also an architect) designed a house – but it was never built. Instead, Hirschenauer was a regular and welcome guest of Walde.
In 1932 the two artists painted the portrait of Lieutenant Peter Scheider together (Hirschenauer the portrait/Walde the background). Other signs of their close friendship are the portraits of Walde’s wife Lily Walde and his daughter Guta Eva, which Hirschenauer created.
Since Walde was aware of Hirschenauer’s outstanding talent for portraiture, he entrusted him with commissions from the upper Tyrolean bourgeoisie. This is probably how the present excellent portrait of Luis Trenker came about. The appearance and hairstyle of the famous Tyrolean actor, writer and alpinist correspond approximately to the time around 1928 (autograph card for „Der Kampf ums Matterhorn“, 1928, Nat. Library Vienna)
The expressive portrait of Luis Trenker with the rapid, confident strokes typical of Hirschenauer shows the great skill of the Upper Austrian painter in this artistic genre. Trenker looks at the viewer directly, openly and confidently. The entire focus is on the detailed face. The work is reduced to the essentials and impressively reflects the unique personality and strong character of a man who already became a legend throughout his life.