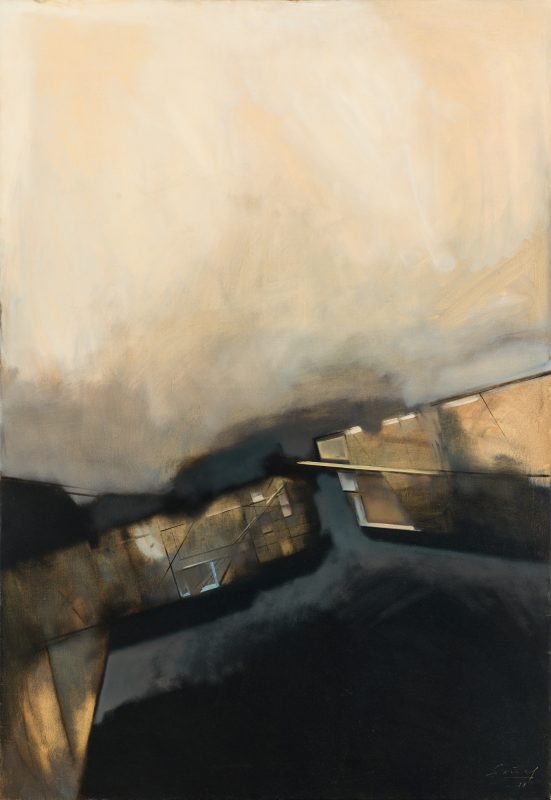 An atmospheric, smoky background in tones of white, beige and black, a geometric, almost crystalline structure, partly shrouded in dark fog. A still life, a landscape, a city veduta or none of the above. The enigmatic motifs of Viennese painter Peter Dotrel arose from an uncompromising introspection, were formed in the depths of the artist’s soul, and then distilled into abstract symbols with the help of his mysterious visual imagery. Dotrel’s paintings – although usually scattered with figurative or objective elements – are hard to grasp, and are designed to be so. Rather, they convey emotions and moods that are transferred to the observer, where they give rise to something entirely new and unique.

His phase of work from the 1970s is characterized by especially fantastic worlds of imagery, with portals to other dimensions, very loosely defined geometric and stereometric shapes or still life-like quotes of French Surrealism. Towards the end of the decade, motifs formed of dark swathes already hint at the stylistic phase of the coming decades, in which shadowy figures and a red-white-black color scheme dominate.

The artistic universe of Peter Dotrel beckons viewers to explore and lose themselves in it. A total of four art books on the painter provide an overview of the impressive life’s work of one of the last students of the famous Herbert  Boeckl and graduate of Franz Elsner’s masterclass at the Academy of Fine Arts Vienna.