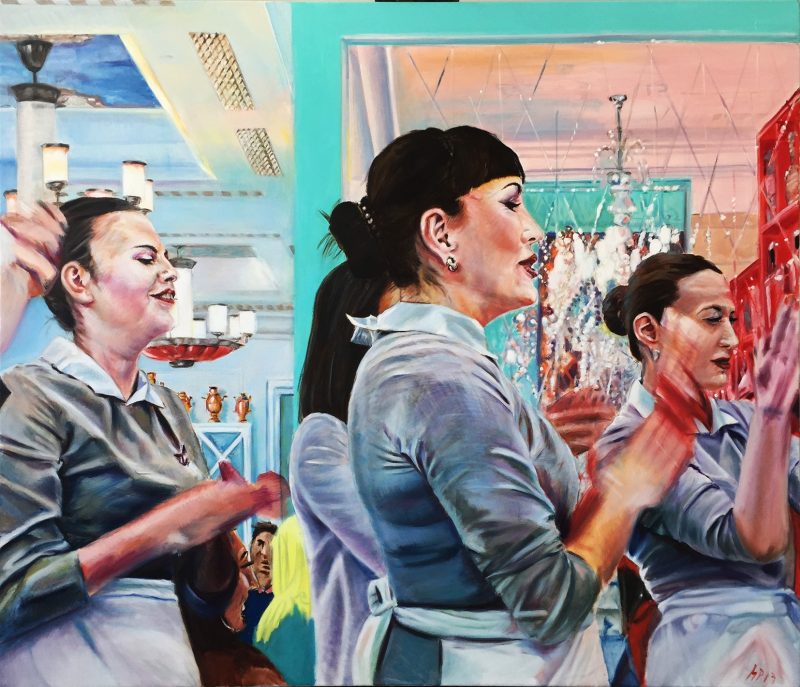 „The Russian bourgeoisie celebrates itself and lets itself be celebrated – here with a birthday serenade at „Dr. Zhivago“: in one of the most beautiful restaurants in Moscow, vis à vis the Red Square. Open 24 hours a day and flooded with light at night, its ambience recalls the history and art history of the Soviet Union: the mosaics on the ceiling of the restaurant quote those in the magnificent metro stations from the Stalinist era, specifically those in the Novokuznetskaya Station, the wall paneling executed in reverse glass technique motifs from Kasimir Malevich’s paintings of the 1920s, and again and again the revolutionary color red pushes itself to the foreground. At the same time, the pompous crystal chandeliers serve the Russians‘ penchant for the exuberant, which goes back to the late tsarist era, i.e. the epoch before 1917.
Several times during the evening, the waitresses (wearing light gray dresses that perfectly match the interior design) appear singing and applauding to celebrate birthdays. In doing so, despite all the restraint – owed to the job – they unfold a self-confident femininity that was lost in Western Europe after the 1950s and challenges us to rethink the ongoing gender discourse.“, Martina Pippal 2017.