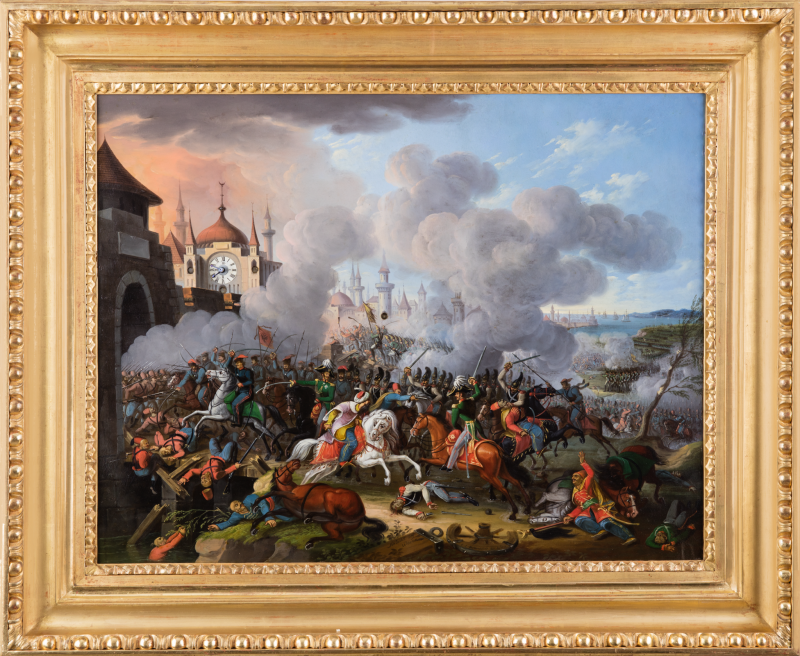 This outstanding picture clock shows an oil painting by Carl Ludwig Hof(f)meister, the most significant painter of Viennese picture clocks. The artist signed and dated his work „C. L. Hoffmeister fec. Wien 1830“ at the bottom right. The „Battle of Varna“ during the Russo-Turkish war of 1828 and 1829 is depicted.
The Bulgarian port city of Varna on the Black Sea had been in Ottoman hands since the 14th century, with brief interruptions. In 1828 during the Russo-Turkish War, the city was besieged for several months. Many of the occupying troops were brought from the Black Sea Fleet of Admiral Alexei Greig to the coast and placed under the command of General Alexander Sergeyevich Menshikov. On October 10, 1828 Varna surrendered and Yusuf Pasha handed over the key to the city to Tsar Nicholas I. The Russian Empire managed to keep Varna for two years before it was retaken by the Ottomans. During the middle of the 19th century, the city also saw fighting during the Crimean War, but it was only after 1878 that Varna became part of the Bulgarian state.
Not only is the painting of this stunning picture clock of the highest quality, the mechanism is also elaborately equipped. In addition to the movement with Viennese grande sonnerie, the clock has a second mechanism for a festive peal, which can be wound via a separate opening in the center of the painting and operates at 6 am as well as at 6 pm.