Back to category Figural Clocks. 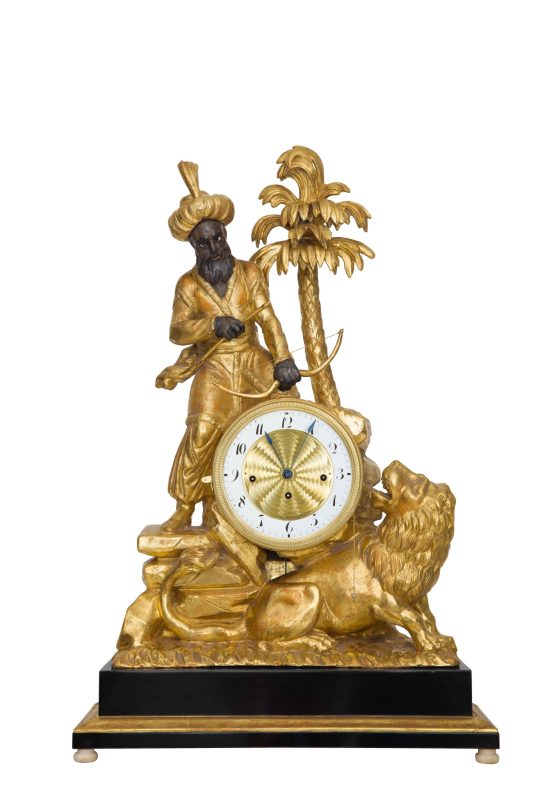 In the early advanced civilizations of Mesopotamia and Ancient Egypt, hunting lions was a privilege reserved for the king or pharaoh. It offered the ruler the chance to demonstrate his strength and distinguish himself as a protector of the people. A lion hunt stele from the late Uruk period (around 3000 B.C.E.) proves that even at that time, a bow and arrow were among the preferred hunting weapons for this royal sport. The tradition was continued by the Indian Grand Mughals and the sultans of the Ottoman Empire. By overpowering the king of the animal world, the regal hunter himself became the master of nature.

This wonderful Viennese sculptural clock from the early 19th century shows a romanticized depiction of the Orient and the elite lion hunt. In the shadow of a palm tree, a sultan with a turban and cascading beard creeps up on a roaring lion. An automaton moves the eyes of the Oriental hunter from one side to the other, almost as if he were looking for the mighty animal. This ornately carved, ebonized, and gilt sculptural clock, equipped with a movement with an anchor escapement and Viennese grande sonnerie on wire gongs, is a wonderful showpiece of the great fascination of European craftsmanship with the culture of the exotic Orient.