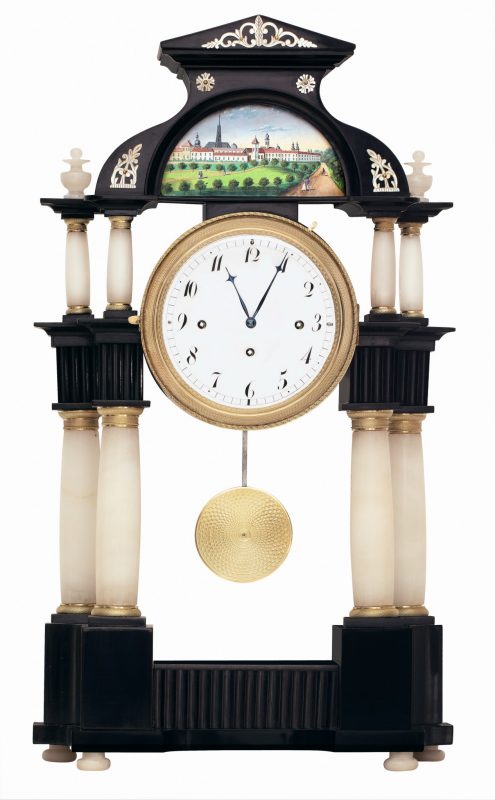 Vienna, first half of the 19th century

Viennese “Hausherrenuhren” (gentleman’s clocks) were a popular type of clock casing of the Biedermeier period. Unlike the so-called “Hausmeisteruhren” (groundskeeper’s clocks), they were made for the upper middle classes. This beautiful timepiece captivates with a rare two-storey case made of ebonized fruitwood. Two rows of four Tuscan alabaster columns each with fire-gilt capitals and bases give the clock an airy elegance. Alabaster vases and delicate mother-of-pearl applications adorn the curved pediment. The arched field contains a miniature painting with an idealized view of Vienna. The inscription „Vienna from the Karolskirchen“ (“Vienna from St. Charles Church”) reveals the angle of view of the veduta. Beside the St. Stephen’s Cathedral and the dome of the St. Peter’s Church, one probably recognizes the tower of the Anna’s Church as also the double towers of the Jesuit Church and the Dominican Church. The movement with anchor escapement has a Viennese grande sonnerie on wire gongs, repeater and turn-off for strike.