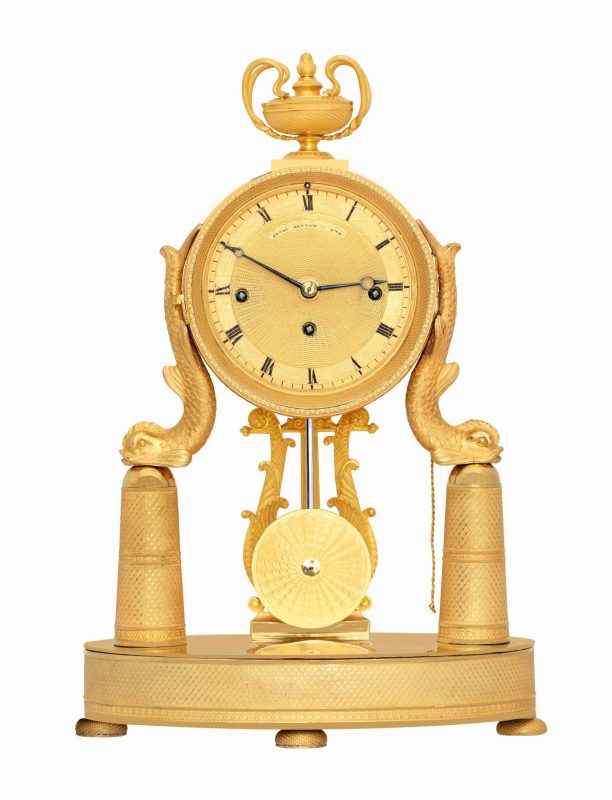 Dolphins were portrayed in Greek-Roman mythology as highly esteemed and intelligent beings and were messengers of the gods and rescuers at sea. They served as mounts for the Nereids (sea nymphs) and the goddesses Venus and Demeter. A constellation was also named after the dolphin. In the Middle Ages it became a popular heraldic animal, which also helped the French heir to the throne to his title. The „Dauphin“ (literally: dolphin) held the county of Albon, whose coat of arms was decorated by the sea mammal. Over the centuries, Dauphin became the title of the Crown Prince, comparable to the Prince of Wales. In the case of the present magnificent Vienna Empire clock, the dolphins act as supporting figures. Their heads rest on conical pedestals and their tails wrap around the richly engine turned case drum. A lyre serves as a further support. The artistically matt and glossy fire-gilt case has an oval base with bun feet and a finial in the form of a vase with snake handles. The dial is also made of guilloché and fire-gilt bronze. The movement of this timepiece was created by the well-known clockmaker Anton Rettich. It has an anchor escapement and a Viennese grande sonnerie on wire gongs with repeater and turn-off for the strike. A glass dome with an ebonized fruitwood base serves as protection for this magnificent Viennese Empire clock.