Back to category Table Clocks. 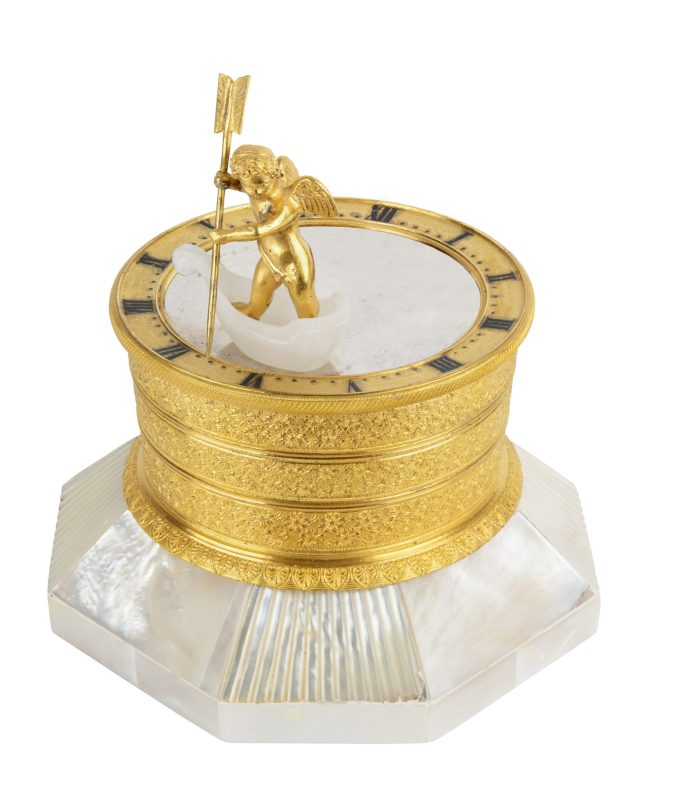 Case
fire-gilt and chased bronze case (ormolu) in the shape of a well, octagonal base with mother of pearl plates
Dial
in the shape of a silver-plated disc, representing a calm water surface, dial ring made of fire-gilt bronze (ormolu), a fire-gilt (ormolu) cupid in an alabaster barque
rotates on the silver-plated disc, holding an arrow which is functioning as clock hand
Movement
duplex escapement, ruby bearings, fine adjustment
Height
6 in

This extremely fine table clock represents a little-known example of the Viennese art of clockmaking from the early 19th century. An octagonal base inlaid with mother of pearl supports the cylindrical ormolu movement case made in imitation of a well. The edge of the well is formed by a circumferential chapter ring made of fire-gilt bronze. The surface of the water is simulated by a silver-plated disk, upon which an ormolu figurine of Cupid sails in an alabaster boat. With an arrow, he indicates the time at the edge of the well. The god of love seems to glide over the water like magic, confirming this timepiece as belonging to the “Mysterieuse” genre of clocks. These are clocks whose operating principles are not visible at first glance. Here, Cupid is firmly mounted on the revolving disk, which is itself driven by a duplex escapement in the base.
Untouched by the passage of time, the eternally young god traces constant circles. Entirely in line with the Latin expression tempus fugit, amor manet – “Time flies, love remains”.