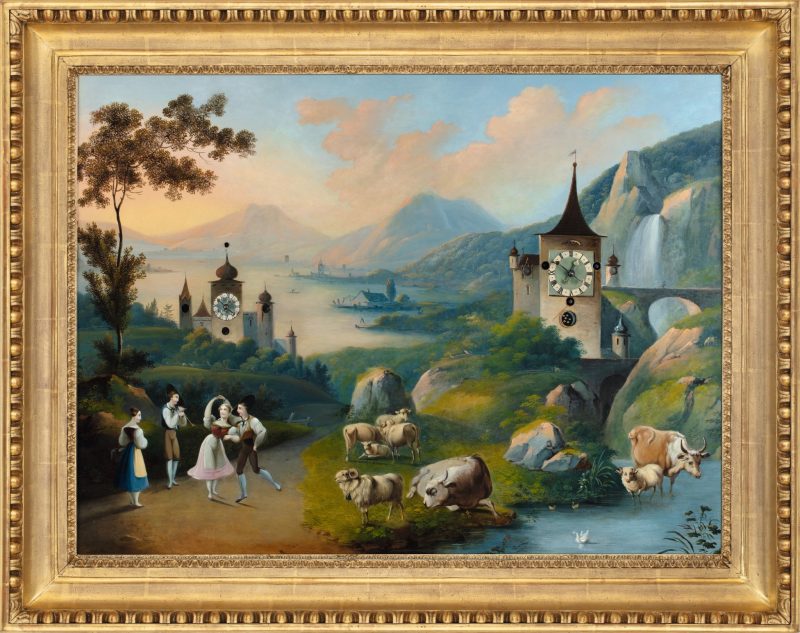 Case
gilt bull’s eye frame
Movement
two separate clockworks: clockwork I: anchor escapement, Viennese grande sonnerie on wire gongs, repeater, turn-off for the strike, drive of the motion work and the indications of clockwork II: drive of the echo strike and the ringing of the angelus by three spring driven movements, automatic release of echo strike by movement I, the synchronized time indication as well as the indication of date, month and lunar phase are driven by movement I (with long arbors), ringing of the angelus with mechanical release by the striking train (operating from April to September at 5 a.m., 12 a.m., 7 p.m. and from October to March at 6 a.m., 12 a.m., 6 p.m.; semi-annual time change by the date indication)
Technique
oil on metal
Measurements
26×32¾ in

This extremely rare picture clock with a variety of indications comes from the famous collection of the important clock expert Prof. Hans von Bertele. It impresses with its complex movement technology with movements connected by long arbors. The movement with anchor escapement, which is located behind the left dial, is equipped with a Viennese grande sonnerie with repeater and turn-off for the strike. It also uses long arbors to drive the motion work and the indications of the second dial. The two dials thus have a synchronous time display driven by the same movement. The second movement is located behind the right-hand dial and is equipped with an echo strike and ringing of the angelus. The echo chime repeats the quarter strike of the first movement. The ringing of the angelus is mechanically released by the striking mechanism and is coupled with the date display. In this way, the chime for reminding of the Angelus prayer sounds according to sunrise and sunset. From April to September the Angelus chime is triggered at 5 a.m., 12 a.m. and 7 p.m., from October to March at 6 a.m., 12 a.m. and 6 a.m. Three small round openings around the right dial are for the indications of date, month and moon phase.
The oil painting on metal was created in the artistic circle of the greatest of all picture clock painters – C. L. Hoffmeister. It shows an ideal landscape, similar to those found in the Swiss Ticino. In the foreground is a figurative staffage with a dancing couple in festive dress and a flute player. Cattle and sheep are resting by a quiet stream with waterfowl. Dials, winding holes and indications are cleverly integrated into two stately fortifications. In the background, between mountains glowing in the red evening sky, one sees a large lake and a rushing waterfall.