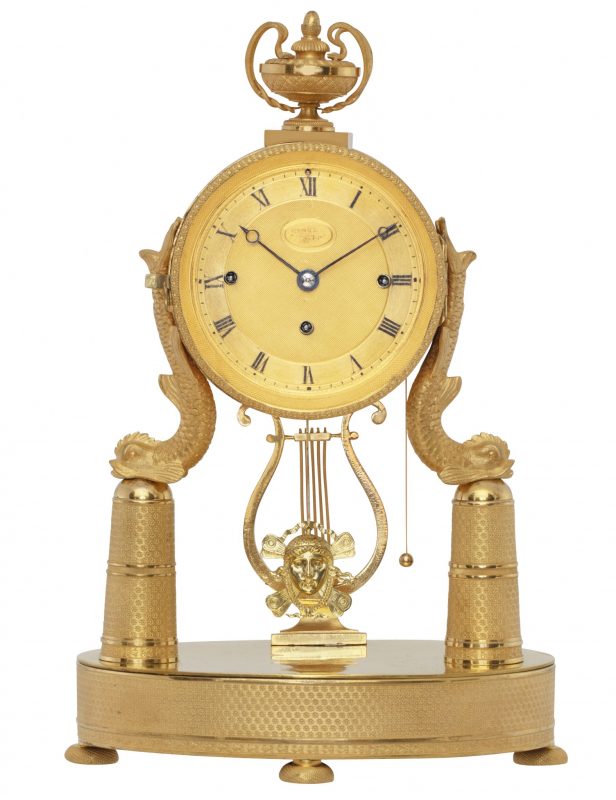 The case drum of this beautiful Viennese Empire style mantel clock is carried by two elegantly curved dolphins on elaborately engine turned conical bases. The pendulum disc has the shape of the face of Psyche with butterfly wings. The dolphin is associated with the god Cupid, who used it as a riding and draught animal. The love story of Cupid and Psyche has been a popular motif in the performing arts and crafts for many epochs. The king’s daughter Psyche is said to have been so beautiful that even Venus was filled with jealousy. However, her son Armor, whom she had sent to marry Psyche to a demon, also succumbed to her charms and hid her in a castle. He visited the king’s daughter in the darkness of the night without her ever recognizing him. Only after some time did she learn Cupid’s true identity, but goddess Venus also discovered her son’s secret lover. After many trials, Psyche was finally granted immortality. In ancient Greece, butterflies were considered the embodiment of the soul, which is why Psyche is usually depicted with their wings.

The present noble timepiece from the first quarter of the 19th century has a movement with anchor escapement, Viennese grande sonnerie on wire gongs, repeater and turn-off for strike. On the dial there are the remains of the signature of the renowned Viennese clockmaker Anton Rettich.