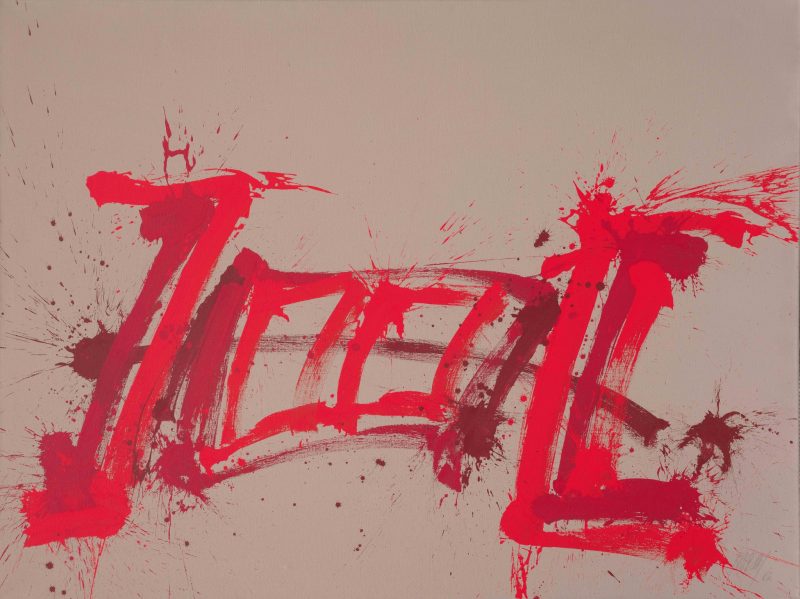 Markus Prachensky’s dynamic series “Farnesina Dixie” is inspired by the jaunty Dixieland music and the impressive antique frescoes of the Villa Iulia. The Roman villa, which is also known as Casa della Farnesina, was presumably constructed around 20 B.C.E. for Iulia, the daughter of Emperor Augustus. During the regulation of the Tiber river in 1878, the antique building was discovered beneath the gardens of the Renaissance palace Villa Farnesina (1508–11). The precious frescoes from the early Augustan period were successfully saved and are today at home in the Palazzo Massimo alle Terme of the Roman National Museum, where Markus Prachensky admired them during his travels to Rome. The gray background that features in some of the Antique wall paintings inspired Prachensky to opt for the smoky background color.

With expressively gestural emotional visual notes in the “color of his life”, red, Prachensky translated the impressions from his visits to the eternal city into his unique, expressive and spontaneous imagery. “The motifs shown in the pictures came about as a result of my perspective of real and imaginary Roman edifices as well as the symbolism of the Roman world of gods, which – despite being an agnostic – seems to me to be very lively, varied, and even humorous.” (M. Prachensky, 2006)