Back to category Picture Clocks with Landscapes. 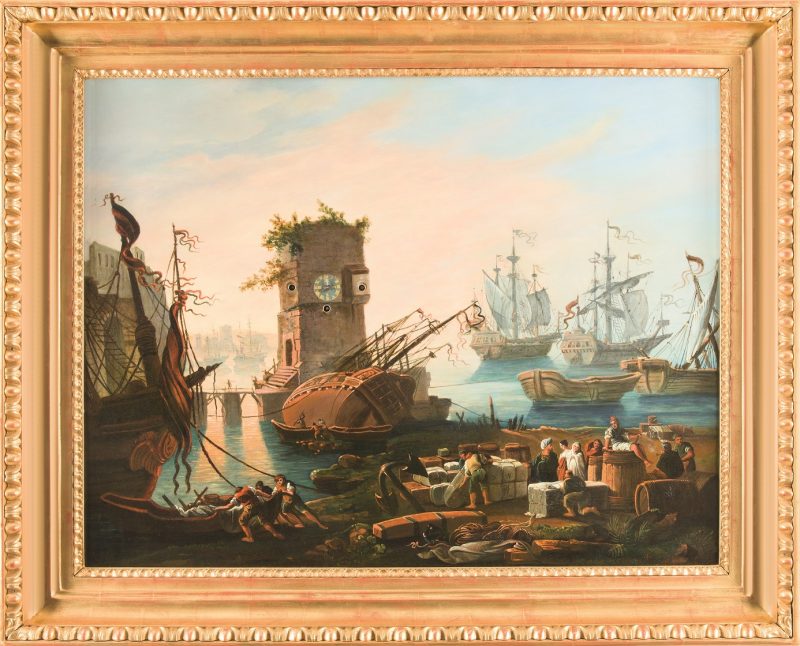 Particularly interesting for collectors is this rare motif of a harbor by the sea. The leaf of the picture clock represents a maritime landscape with a lively scenery in the foreground. The coastal landscape shows a relatively low horizon with a wide, serene sky and a narrow strip of coast overlooking the open sea. On the left side of the picture are several ruins, including a tower, with the clock dial painted on, which is connected to the mainland by a bridge. Some ships are on the sea, including a partially sunken one, another is cut off from the edge of the picture on the left, fastened to the harbor with heavy ropes. In front, several men push a dinghy into the sea. On the narrow coastal strip, we see other staffage figures at work, shopping or waiting, possibly while a ship is being loaded. A scribe and an oriental-clad gentleman with a turban accompanied by two ladies can also be recognized. Numerous set pieces such as a large anchor, barrels, pieces of luggage, ropes or a sail can be seen on the coast and above all in the foreground of the picture.

The wonderful musical movement was made by the company “Brüder Stern” (Anton and Adolf Stern), that resided in the city center of Vienna at the Hoher Markt.