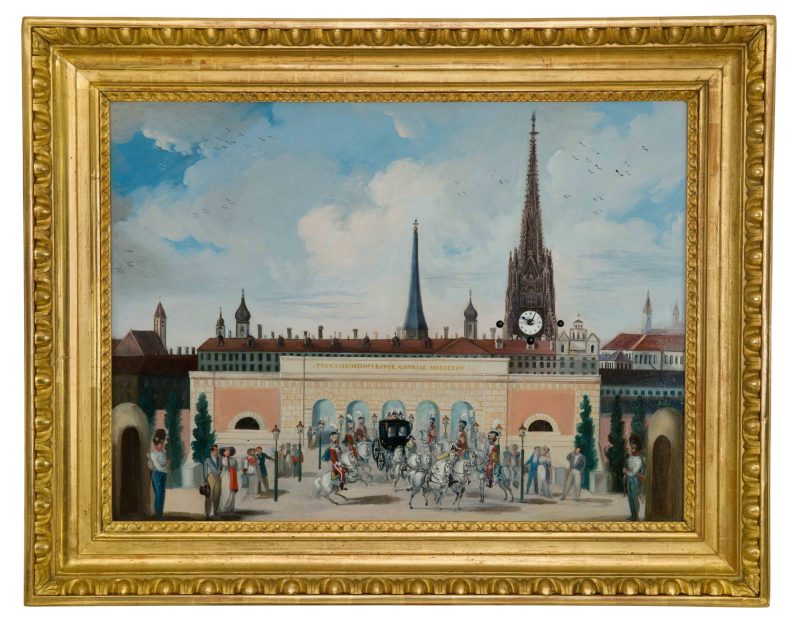 The painting on this splendid picture clock shows both an idealized view of Vienna as well as an event of great historical significance for the imperial capital. Depicted here is the first time that Emperor Franz I passed through the just completed “Äußeres Burgtor” (outer gate of the Hofburg residence). The date, October 18, 1824, had been chosen deliberately – it was the 11th anniversary of the Battle of the Nations in Leipzig, in commemoration of which the triumphal arch-like gate was constructed.

After the bastion was blown up by Napoleon’s troops, the fortification in front of the Hofburg imperial palace had to be rebuilt. From 1821 onwards, the gate was constructed according to plans by Luigi Cagnola and Peter Nobile, as the new entrance to the imperial residence. The inscription “Franziskus I. Imperator Austriae MDCCCXXIV” indicates both the commissioning emperor as well as the year of completion, 1824. The middle archway was almost always locked; after all, it was reserved for the emperor.

Six mounted officers of the royal Hungarian guard (the most elite guard of the emperor, alongside the “Arcière” guard) form a line for the stately carriage with three footmen, a team of six white horses and two outriders. Presumably, this is the personal overland carriage of Franz I, which today can be admired in the Schönbrunn Imperial Carriage Museum. In the carriage itself are the emperor and possibly also Archduke Ferdinand, the later Emperor Ferdinand I. In the left and right-hand lower corners of the image, two soldiers of the Hofburg guard are positioned in front of their sentry boxes.

The veduta of Vienna is defined by the elongated wing of the Hofburg. Behind it, the church towers of the city rise up, most notably the impressive south tower of St. Stephen’s Cathedral, into which the clock dial is integrated.