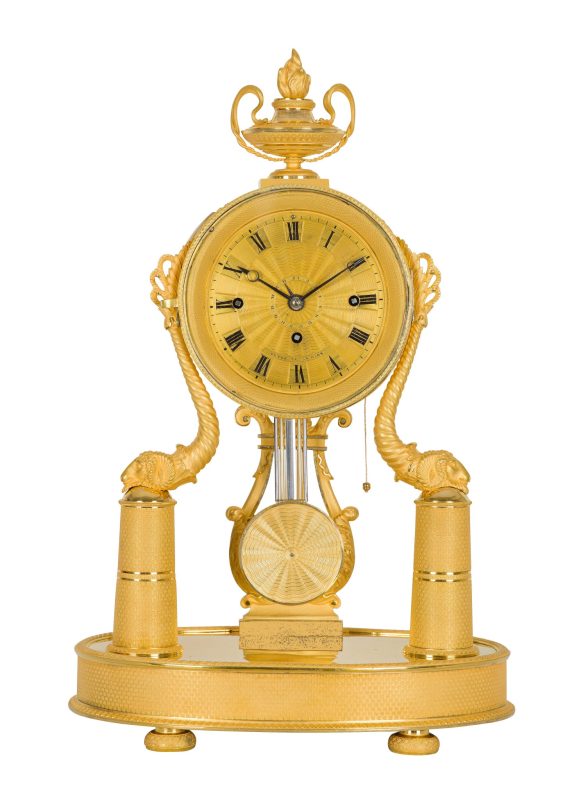 This especially richly engine turned mantel clock with skillfully applied matte and polished fire gilding is a masterpiece of the Viennese Empire. This model is among the most sought-after of the Austrian art of clockmaking of this period, has been published multiple times in the specialist literature and is represented in the most important collections. It was manufactured in two different sizes – this larger version is considerably rarer and more detailed, and consequently also particularly coveted.

Even the oval base with bun feet is lavishly decorated with fire-gilt guilloches and decorative fillets. The upper surface has deliberately been left smooth so as to reflect the magnificent clock case situated on top. Resting on two engine turned conical pedestals are curved cornucopias with ram’s heads, which in turn bear the case drum. Behind the mock gridiron pendulum with engine turned pendulum bob is an open worked lyre, which
serves as additional support. The finial takes the shape of an intricately worked oil lamp with snake handles. The glazed back and two viewing windows on the sides allow fascinating insights into the movement with a Viennese grande sonnerie, which was produced by the famous master clockmaker Peter Rau (1780–1829).

An Empire clock with an almost identical case can be found in the Vienna Clock Museum (UI no. 79).