Back to category Empire and Biedermeier Clocks, Figural Clocks. 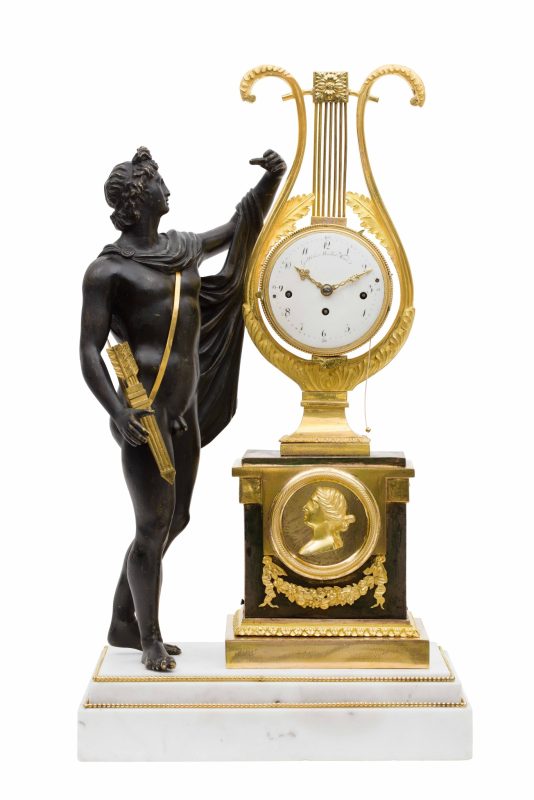 “This Apollo surpasses all other images of the same […]. An eternal spring, as in the blessed Elysian Fields, clothes the delightful masculinity of maturity with appealing youth and plays on the proud edifice of his limbs with gentle caresses.” Johann Joachim Winckelmann, 1764

“My entire self is shaken, you can imagine, and I’m still quivering much too heavily to hold my quill steady as I write. Apollo Belvedere, why do you show yourself in your nakedness, that we must shame ourselves for ours?” Johann Wolfgang von Goethe 1771

Winckelmann’s and Goethe’s passionate descriptions of the Apollo Belvedere illustrate the extraordinary position occupied by this sculpture in the reception of antique art of that era. The Roman marble statue from the 2nd century C.E. was discovered in the 15th century in Emperor Nero’s Villa in Anzio. It was based on a Greek bronze model from the 4th century B.C.E., most likely created by the Athenian sculptor Leochares. The Roman sculpture has been housed in the Belvedere Courtyard in the Vatican since the early 16th century, which is what earned it its epithet.

In the second half of the 18th century, the enthusiasm for the Apollo Belvedere and its impact on the fine arts was at its peak. This high regard for the antique masterpiece also gave rise to this splendid Viennese mantel clock from the period around 1800. Here, Apollo is crafted from bronze – thus more closely approximating the Greek original than the Roman marble version. Unlike the model from Antiquity, the fingers of the right hand are not wrapped around a bow, but instead around an ormolu lyre, one of the most important attributes of the god of art and leader of the muses. The movement is equipped with the complex Viennese grande sonnerie; the dial bears the signature of the renowned Viennese clockmaker Gottlieb Müller. This exquisite early sculptural clock is an impressive synthesis of the fine Viennese craft of clockmaking with a fantastically designed classicist clock case.