Back to category French Clocks. 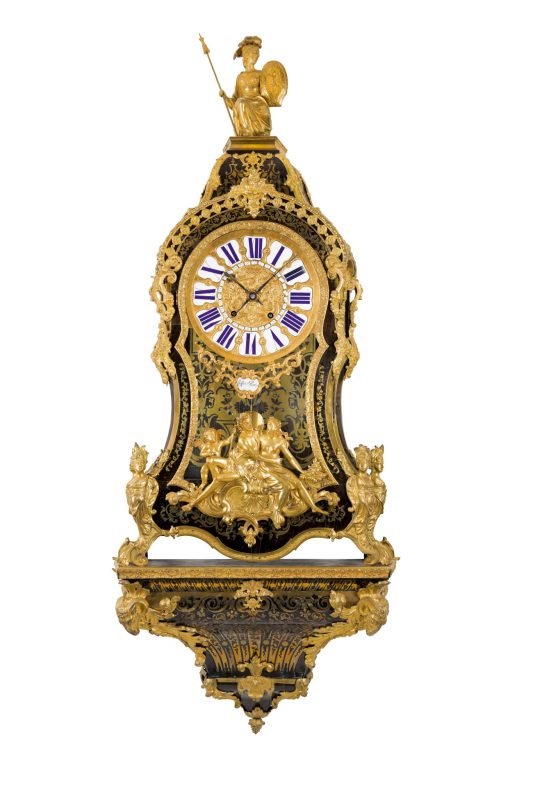 Boulle marquetry, named after the French ébéniste André-Charles Boulle (1642–1732), is one of the most elaborate, delicate and precious surface designs in cabinetmaking. The imposing case of the present large mantle clock and the accompanying wall bracket are richly decorated with opulent Boulle and contrepartie Boulle-work in tortoise shell and brass. In addition, numerous gilt bronze applications adorn the magnificent timepiece. The clock case rests on four volute feet in the form of female herms, with a figurine of Minerva serving as the finial. The central group of figures below the dial is a representation of the popular Roman proverb Sine Cerere et Baccho friget Venus (“Without food and wine, love grows cold”). The youthful Bacchus, wearing animal fur and a crown of vine leaves, embraces Ceres, the beautiful goddess of fertility, who makes herself known by a basket of fruit. The winged Cupid nestled against the couple symbolically represents his mistress, Venus, the goddess of love. In the repoussé décor of the ormolu dial, the French national symbol, the Gallic rooster, can be discovered alongside cornucopias and a mascaron.

A small enamel cartouche below the dial as well as the plate of the movement bear the signature of Jean-Jacques Fieffé, one of the most important clockmakers under Louis XV. After being appointed clockmaker of the Observatory of Paris, the doors of the high nobility were open to Fieffé and he was able to establish himself as a sought-after manufacturer of luxury timepieces. Clocks by the great master can be found today in the MET Museum New York, the Getty Museum Malibu and the Wallace Collection London, among others.