Back to category Arts and Crafts. 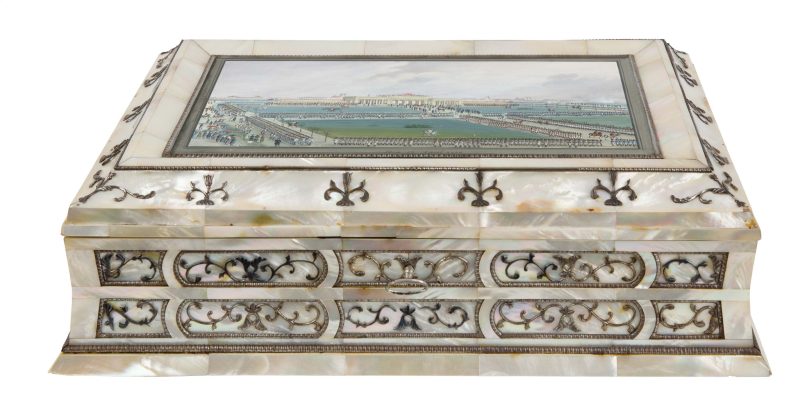 This glorious, museum-quality necessaire, or travel kit, is a showpiece of Viennese mother of pearl works of the first half of the 19th century.
At that time, Vienna was, next to Paris and London, a center for internationally sought-after mother of pearl objects of the highest quality.
The combination of mother of pearl with polished steel is also a specialty of Viennese craftsmanship of this era. The exquisite casket is decorated with a watercolor painting by Balthasar Wigand, the most prominent Austrian miniature painter of the Biedermeier period. It shows an event of the utmost importance for the Habsburg dynasty: the Field Mass in front of the Hofburg, held in celebration of the recovery of Emperor Franz I on April 13, 1826. It is said that the emperor watched the solemn ceremony through a window from his chambers in the imperial palace. On the “Äußere Burgtor”-gate, which was completed two years prior, is a tent with a specially set-up altar inside – allegedly Ottoman tent fabric was used, war spoils of Prince Eugene. In the background, the suburbs of Vienna can be made out. Balthasar Wigand depicts the liturgical moment of the transubstantiation, which the participants in the mass follow from a standing position.

Comparable mother of pearl works with Wigand watercolors can be found in the MAK – Museum of Applied Arts Vienna, the New York Met, the London Royal Collection, and the Victoria & Albert Museum. The necessaire is extremely well-equipped. Three storage compartments, lined with ecrucolored velvet and light blue silk, provide all manner of luxurious utensils to be used for sewing, at a dressing table or escritoire. Behind the mirror on the inside of the lid is a secret compartment. When you open this up, the cassette is transformed into a writing desk and nine gold-embossed folded pockets appear. These are inscribed with the days of the week in French along with “varieté” and “souvenir” and are obviously intended for storing letters.

The opulent design and Balthasar Wigand`s watercolor with the Habsburg-related pictorial subject suggests that this museum-quality mother of pearl necessaire is a commissioned work for a member of the imperial court.